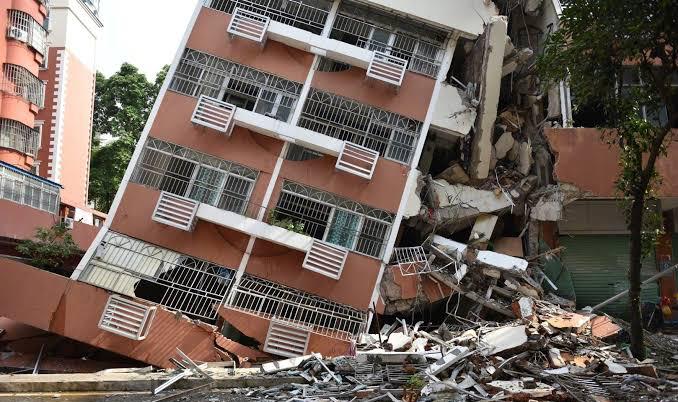 There are quite a number of reasons why a building collapse could happen. It could be as a result of an act of terrorism, a structural failure or natural disasters like an earthquake, hurricane, flooding, landslide, tornado or a mudslide.

Nigeria has suffered its share of building collapse in the past with several cases of buildings collapsing and killing scores of people.

In August 2018, a four storey building collapsed killing 3 and injured at least 18 people in Abuja, Nigeria.

On November 23, 2018 a 7-storey building collapsed in Port-Harcourt, the capital of Rivers state in Nigeria, killing 5 people and about 40 people were left injured.

On December 10, 2016, Nigeria was hit by a tragedy when a church collapsed in Uyo, the capital of Akwa Ibom; killing over 200 people.
The Akwa Ibom State Governor, Udom Emmanuel was among the lucky survivors of this tragic incident when the church building collapsed right in the middle of a Saturday service.

Sadly, there has been an increase in the number of collapsed buildings in Nigeria in the last 10 years.

According to the General Manager, Lagos State Building Control Agency, Sola Adeigbe, a total of 1,104 buildings were sealed from Between June and October 2016 across Lagos State as a result of defective or illegal construction.

The fact remains that buildings do not just collapse. There are always warning signs. In many cases, the building control agency of several states in Nigeria carry out a non-destructive integrity test.
This test according to real estate professionals is to ascertain the structural stability of the building. This helps the state know if such buildings can be renovated or re-engineered.

In cases where building are detected to have a defect, building owners are asked to take the test before further actions are taken by the state.

As part of our commitment to ensuring the safety of homeowners as well as those who live or work in properties in Nigeria, we have compiled a list of 6 warning signs that should not be taken for granted.
The moment you notice any of the warning signs discussed in this article, immediately evacuate the building and make it a point of duty to notify the nearest Local Council Development Area (LCDA).

1. Major cracks in the wall:
Thermal movement remains one of the most potent causes of cracks to appear in the walls of buildings. If overlooked, this could eventually lead to the collapse of the building.

2. Gaps between floors:
When there are gaps between the walls and floors of a building, you must understand that this is a structural defect that could end very badly.

In 1995, a building with gaps between the floors and its walls eventually collapsed and killed three people.
Uneven spaces and sloping floors are not to be taken lightly. For instance, take a look at the house from the street. Is the front entrance straight? For contemporary homes, sloping floors are a really bad sign.

3. Deteriorating support structure:
Deterioration can occur due to different reasons including;
Substandard materials used, as building components fail, they can directly impact on the exterior walls. The collapse of interior floors can push against masonry exterior walls and this eventually paves the way for the collapse of buildings.

Tears and fissures in foundation structures: This can also happen when fissures appear in welds of steel during construction or over time. A building is likely to undergo progressive collapse when a primary structural element fails, resulting in the failure of adjoining structural elements, which in turn, causes further structural failure culminating in a building collapse.

4. Deformed siding: Siding is what protects your building from the moisture and the elements. It can be found on the inside and outside the walls of the buildings that are well constructed. When not kept in good condition, it can deteriorate and result in weakening of foundational structures; something that often leads to building collapse.

5. Creaking and popping sounds:
When the house you live in begins to make creaking and popping sounds, you should be very worried. In September 2016, a resident heard creaking sounds on the 7th floor of a building, which eventually collapsed.
When a house creaks, what is happening is that the metal parts contract much more than the wood does. As a result, the nails, pipes and air ducts rub against the wood.
Also, the wood rubs and grinds against other wooden parts of the structure, which creates the creaking sounds.
If you ever find yourself hearing weird sounds and cracks especially during strong winds, it’s a sign you should pay attention to.

6. Mould and water stains on walls and collapsing ceilings:
There is usually one way mould and rot are caused – Water got to a part of the house that should not be wet. Professionals prefer to call this ‘moisture penetration.’
When there is an excess of moisture that can’t escape within the structure of a house, it is called a damp.
The natural tendency of moisture is to spread out from wet parts of a house to the dry areas. The moisture would also move downwards under the influence of gravity.

Your house construction should allow for this.
If this does not happen, it could result in clay lump walls collapsing.

7. Moving house:
One of the most dangerous warnings of an impending collapse is when the house is moving. The movement here does not refer to the way a human would move. Rather, this means that over a period of time, certain parts of the house have shifted from their original position as a result of foundation problems. Technically, when the foundation of the building shifts, it sets into motion, a disturbing number of serious events throughout the house, which forces the house to move.

Final thoughts, a building does not suddenly collapse in one night without any warning sign. The signs are usually there to be seen. One of the biggest problems with these signs is that, if neglected, they make the collapse of the building inevitable. In essence, early warning signs should not be handled with levity.