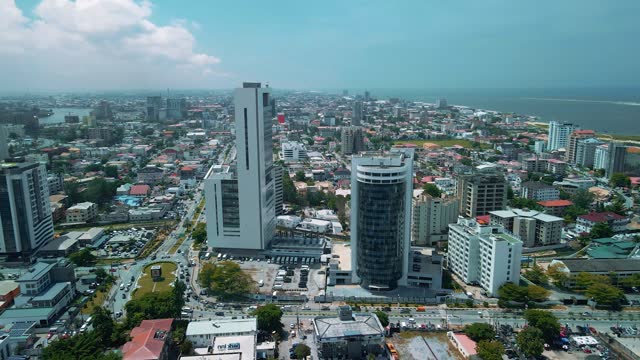 The first half of 2022 saw a period of increased real estate market activity with the sector building on the 2021 economic growth momentum. The International Monetary Fund noted that Nigeria’s economic recovery continued to strengthen against the backdrop of the agriculture and services sector with GDP growth reaching 3.6 per cent (y/y) in Q1 2022. All sectors apart from the oil sector were on an upward trajectory with Estate Intel projecting that the real estate services and construction sector would grow by 5% to 10% in 2022.

This optimism in the market was further boosted by the increased developer and occupier activity.  Microsoft’s launch of its Africa Development Centre into the market was perhaps one of the most significant occupier activities during the period. Headquartered at Kings Tower, the tech giant joined the pool of other tech occupiers such as Oracle, Ericsson and Facebook who have continued to underpin demand in the office sector.

However, the real estate sector in Lagos continues to be impacted by long-standing challenges of product mismatch, currency fluctuation and rising inflation rates. Below we analyse how the different sectors are expected to perform throughout the year.

The office sector is likely to remain subdued

The total formal office stock in Lagos is estimated to be just above 1 million sqm. Up to 55% of the stock is Grade B while Grade A only accounts for about 25% of the total stock.  The sector has been on a 6-year downward spiral following its peak in 2014. Since then, rents have fallen by  41% on average across all building grades while supply has increased at an average rate of 10.8% Y-o-Y. This has resulted in a market shift from a Landlord’s Market to a Tenant’s Market.

So far, demand has continued to be driven by the energy sector, with energy occupiers constituting the larger share of office takeup in Lekki Phase 1, Ikoyi and Victoria Island.

We expect the overall sector will remain subdued with rising inflation and the subdued nature of the energy sector impacting on demand leading to a further decline in rents of office properties across the board.

With a supply deficit of up to 2.3 million units, the residential sector is emerging as the market’s bright spot

The residential sector in Lagos has been in a state of constant undersupply as population and demand continue to outpace supply. The current stock is estimated at 1.49 million units. On the other hand, we estimate there are approximately 3.8 million households in Lagos, resulting in a supply deficit of up to 2.31 million units.

Large-scale institutional investment in the residential space has largely been dominated by domestic investors who focus on building and selling fast as rental yields are very low. Additionally, investor interest in the housing space has ignored the affordable housing segment, where the demand is large, and focused on luxury property, where the margins and return on investments are typically higher due to high construction costs

However, this is fast changing. The market is starting to see a shift in investor interest from the high-income market where there is a current oversupply to less served demographics like students and young professionals with robust demand as a result of the size of the market, resulting in a positive outlook for the residential market.

While Lagos’ demographic profile bodes well for retail, macroeconomic challenges have continued to weigh down on the sector.

With a population estimated at approximately 20 million people, Lagos has a strong consumer base which bodes well for the retail sector. As such, essential retailers such as grocers and pharmacies have remained resilient in terms of market performance.

Market over supply is likely to result in a development slow down in Lagos’s Hospitality sector.

With total stock estimated at in excess of 8,000 keys, the Lagos hospitality sector remains oversupplied. Coupled with the pandemic impact, the market has continued to see a slowdown in development activity. A recent report by W Hospitality indicates that Nigeria recorded the largest decline (41%) in its development pipeline, the highest decline within SSA. As a result, the country was overtaken by Egypt and Morocco to rank at third place in terms of number of rooms in the continent.

Interestingly, in terms of demand, the market has performed relatively well compared to other cities. According to STR, hotel occupancy across Lagos was estimated at 63% as at April 2022 compared to a year earlier. This was relatively higher compared to 52% in Accra, 40% in Nairobi and 62% in Cairo.

As such we expect the market will continue to perform relatively well throughout the year as the market recovers.

Overall, while the outlook remains positive in terms of economic growth, it will not be a case of one shoe fits all for the real estate sector. Sector-specific nuances and underlying drivers such as demographics for the residential sector and energy sector performance for the office sector are set to determine overall real estate sector performance throughout the year.